In the living room, a PC running openELEC powers our home theater. The hardware (AMD A6-3500 from 2012…) isn’t anything fancy but its powerful enough to decode pretty much anything thrown at it. Also the Lian-Li PC-C37  case makes it look pretty good in the TV unit. However, the setup has one big disadvantage: No mater the BIOS settings  tried, I could not get it to turn on via the infrared remote receiver used. The receiver is a standard Philips eHome compatible receiver as introduced with Windows MCE in 2002. This remote/receiver is probably the best supported one around, works absolutely flawless, but as said would not power on my HTPC.

Lazy as ever, we found different solutions to power the PC on without having to press the actual power button. Fi. by using the Yatse app that supports WoL (Wake up on LAN). This is still an extra step, and could be “streamlined”.

After the thousandth time of standing up and powering on the PC I decided to do something about it! A simple microcontroller and IR receiver should be able to take over my job..

The parts used for this “quick n’ dirty” version are:

After some trials on a breadboard, the final schematic is as follows:

The TSOP38238 is a pretty convenient module and converts the IR pulses into something the micro can use and is compatible the standard  IR library available for the Arduino programming environment.

To function the board only requires three inputs (JP2): +5V, PSW_C and GND:

Every ATX motherboard contains a header which contains pins for the LEDs and power and reset switches.  My motherboard names the power switch pins PW+ and PW-. To start the PC the PW+ 5V signal needs to be pulled to ground.  On the schematic this is referred to as PSW_C, as it is wired to the collector of the 2N2222 transistor. The PW- pin can be used as a general ground, as this is common with the whole motherboard’s ground.

On my Gigabyte GA-A75M-UD2H the header is as follows: 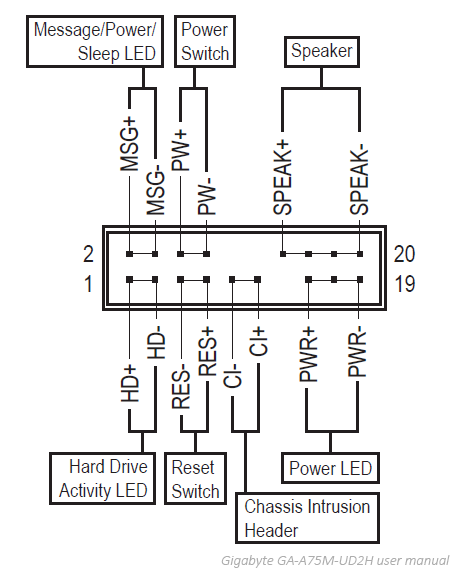 All that is left from the inputs is the 5V signal to power the circuit. Obviously the +5 signal from  PW+ cannot be used, the micro draws enough power to pull it to ground. A solution would be to tap into the 5VSB (Standby Power) lead on the ATX header, but this requires cutting and tapping into the ATX cable from the PSU. An easier solution was to use the +5V from an unused USB header, as a BIOS setting allows  it to have power even when the PC is turned off. 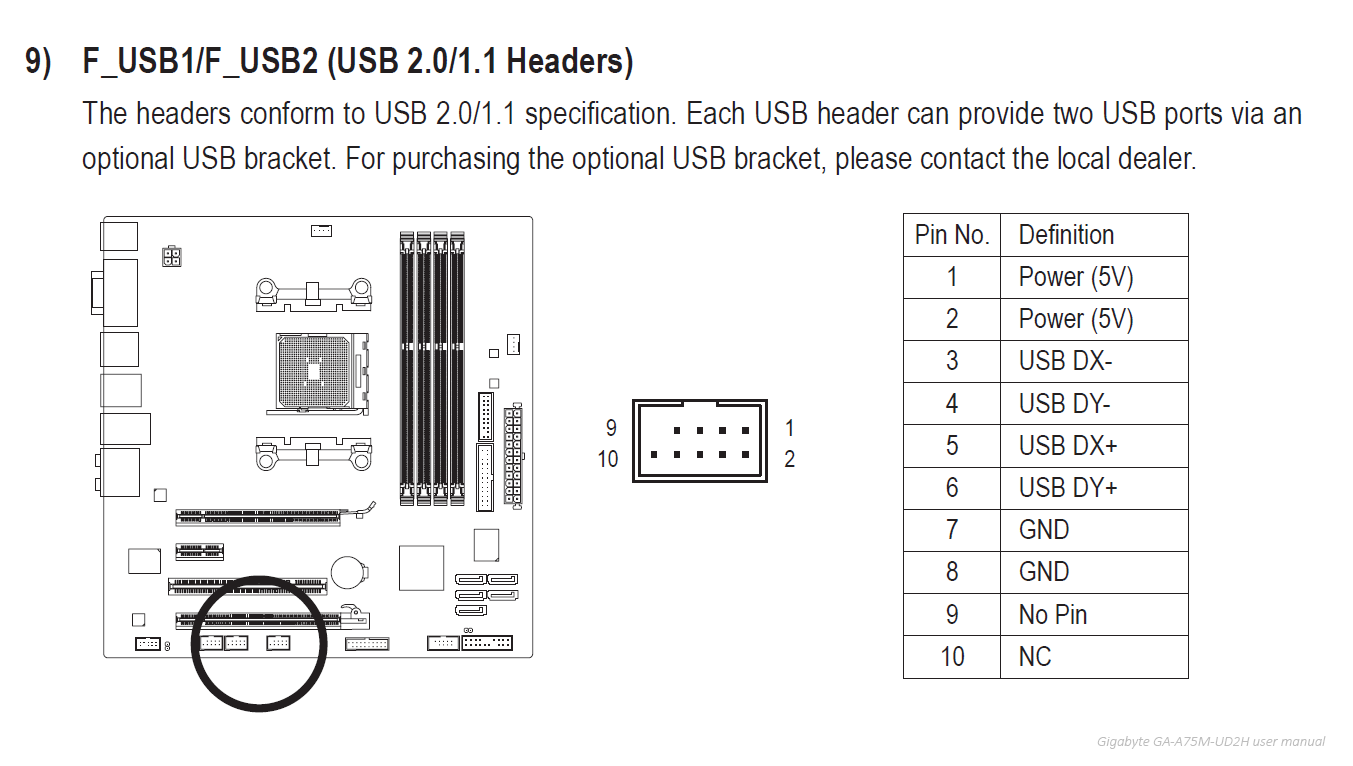 Summarized, the following pins were used:

This completes the schematic.

All that is left is the programming, to program an ATTiny from the Arduino environment a couple of items are required:

First of all support for ATTiny micro controllers needs to be added to the Arduino IDE. A good tutorial on how to do this can be found here.

Also a different version of the standard IRRemote library is needed. The ATTiny uses different timer registers compared to the ATMega used in the standard arduino. The library can be downloaded here. Extract the zip file and place it in the arduino/libraries folder. For my code I have renamed the folder from IRremote to tiny_IRremote so I can use both the original library and the ATTiny version.

In this quick n’ dirty version the IR codes are hard coded into the program. The eHome MCE remote sends two alternating commands for PowerToggle, so both are defined as OK.

To program the ATTiny a SparkFun Pocket AVR Programmer was used. However, the link mentioned above on how to add support for the ATTiny lists a few alternatives. For instance, a regular Arduino can be used for this as well.

Now the board can be connected to the PC! To achieve this I’ve soldered some jumper wires connecting PW+ and PW- in parallel with the power switch. This keeps the power switch functional. +5V power was connected directly from the USB header. Some insulation was added with electrical tape.

The results have been great, the circuit is reliable and reception is very good! Haven’t needed to get off the couch so far.. 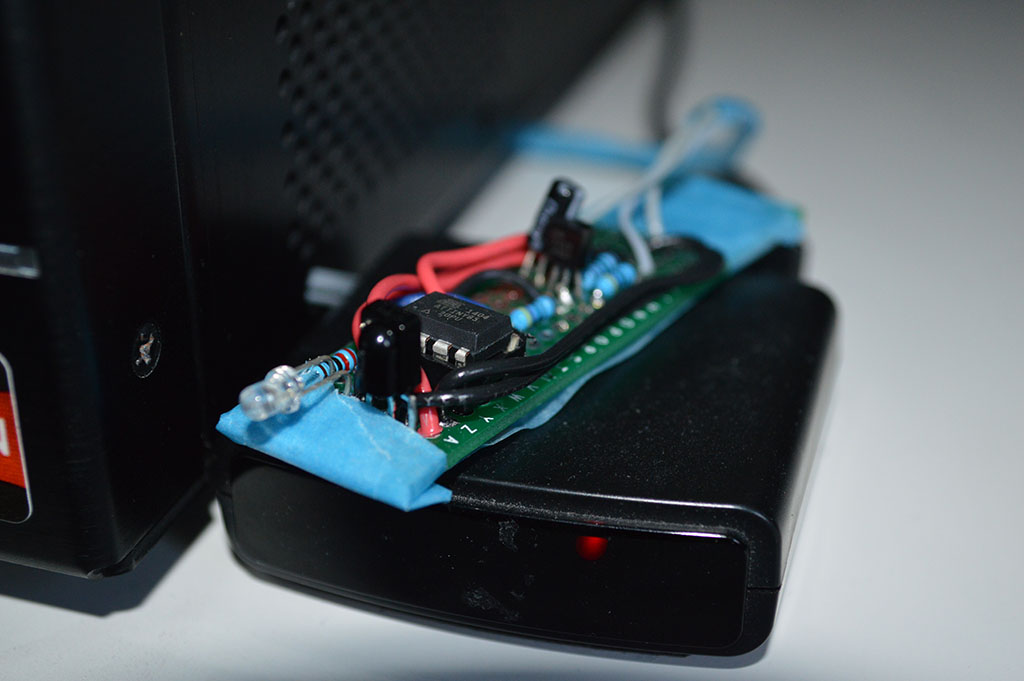 As this is a very quick n’ dirty solution to a laziness problem a couple of issues might exist with this schematic/program:

These issues might be resolved in a not so quick and dirty solution in the future.